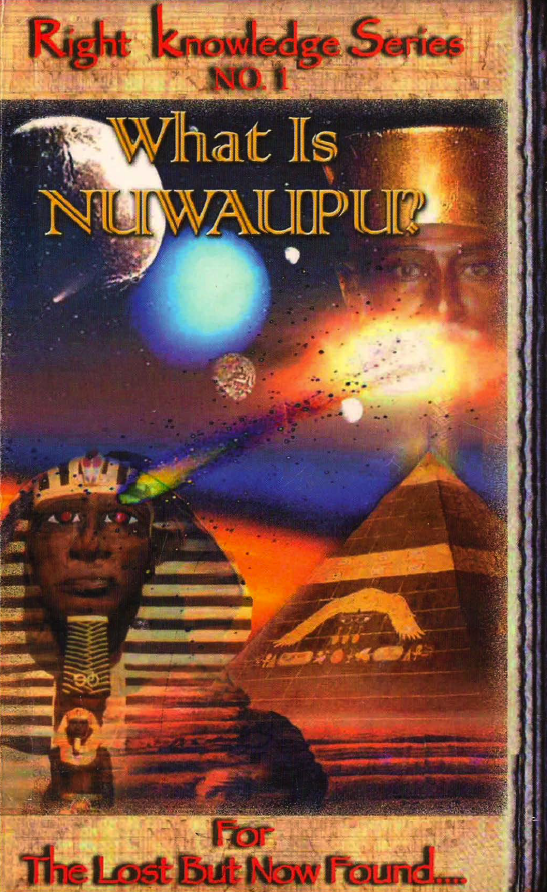 By Your Freewill Offering Read, "WHAT IS NUWAUPU?" on pdf.

There are terms in this book that may be offensive. These are just the terms that the Egiptians used for their enemies. For instance the word Haribu is Egiptian and became Hebrew. The Israelites were called Heka Khasut "Hyksos". The foreign invaders such as the Caucasians were called Tama'-hu meaning "living filth". This is in reference to their lack of knowledge of hygiene and their body odors due to their ignorance. Pa Tuta is a term used for an evil person or being. This is regardless of race gender or creed. And then Apep "Apophis" is a demon creature a serpent that punishes those souls that have failed in the Hall of Judgment when weighed on the scale against the feather of Ma'at; also the Devil of your Bible, called Nakhash In the Hebrew. In the Qur'an "Koran" 2:256-257 you see the word Taaghuwt. When you look in Genesis 3:15 it says the serpent has a seed.

That means the serpent has a physical seed, flesh and blood and that is why Jesus said in John 8:44 you are of the devil your father and I quote: "You are of the your father the Devil. and the lusts you will do. He was a murderer from the beginning, and did not abide in the truth because there is no truth in him. When he speaks a lie, he speaks of his own, for he is a liar and the father of it” Leviathan is ·also a term used when referring to a serpent; yet is also used when referring to the Spell of Sleep that the Egiptians call Amam "The Devourer". Leviathan is the great serpent or dragon mentioned in the book of Revelation Chapter 12. Revelation12 :7. Read More...