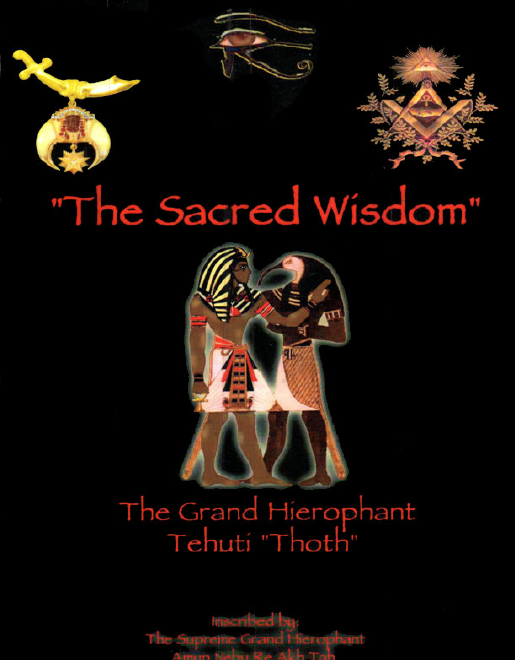 By Your Freewill Offering Read, “THE SACRED WISDOM” The Grand Hierophant Tehuti “Thoth” On pdf.

I, the Grand Hierophant of the Ancient Egiptian Order take great pleasure in presenting this corrected document of a most misunderstood and under appreciated doctrine. It was presented as the Kybalion, when in fact it was a very poor interpretations by the Hyksos (Canaanites) of what they wished the great Grand Hierophant Tehuti's works for the world were about, and the onlookers were misinformed in order to sway the true seeker from the right path to the blinding light of European belief systems and the Secret Doctrines were all but lost, however this scroll work is based upon a resurrection of the world-old teachings of the Egiptian Grand Hierophant known by many names, Tehuti presented to you in this day and time via an incarnation, a wish on the part of the original, to have this record set straight, sent it and signified it through myself. I have been known by many names: (Amunubi Rahkaptah, Issa Al Haadi Al Mahdi, Al Mukhlas, Al Mujaddid, Ilah Mutajassida, Al Qubt, Melchizedeq, Al Khidr, Murduk, Chief Black Eagle, Malachi, finally back to Amunnubi Raakh Ptah). In all of the depictions and drawings of Tehuti on the walls of Tombs and monuments in Tama-re "Egipt"you see Tehuti drawn with a green hue, which is what the Muslims refer to as Al Khidr, again stemming from ancient Egipt, same being different name.

Originally named either Djehuti or Zehuti by the Pa Tama-reyeaat "The Egyptians", Tehuti "Thoth" was given his better-known name by the Greeks. They linked him with their own God or Thehos "deity" Hermes, and like Hermes he was considered to be the thehos "deity" of wisdom, writing and invention. He was also the messenger and spokesman of the neteraat “deities" and finally a lunar neter "deity". under the sun deity Re "Ra". You can see the Greek word Thehos came from the Hieroglyphic word Tehuti, or Thoth.

The Worship of Tehuti "Thoth" dates from the pre-dynastic period, as his standard appears on artifacts of this time, and his name Djehuti indicates that he originated in the Hebtiaat "Nomes", of Dehut in Lower Egipt. He is represented as a man with the head of an ibis bird, which is often crowned by the crescent Ah "moon". The baboon is also sacred to him, for in Khemenu "Hermopolis" he merged with the local baboon Neter "deity" Hedj-Wer. Read More…